Corporate debt to GDP is at its highest level in all of recorded history.

Decreased cash flows and less corporate debt demand in a recession will stop buybacks and lead to insolvency in the junk bond market.

This may lead to another wave of bail outs and increased sovereign debt.

Increased sovereign debt will lead to Japanese and European-like economic malaise unless the U.S. creates inflation.

As wages have remained relatively stagnant for decades, credit has become the engine of economic growth in the U.S., and excess credit and leverage the primary driver of recessions. The two charts below demonstrate this process. Real wages have remained stagnant since 1973. Around that time we begin to see increases and violent swings in consumer credit change. The reason? Without wage growth, the credit economy must be pumped up to increase consumption (and therefore GDP). 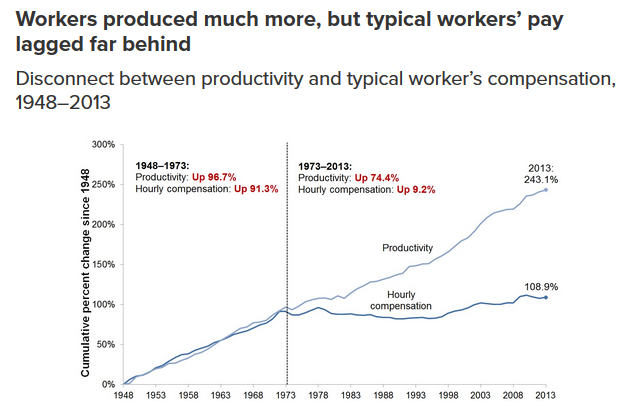 Home ownership, created with debt, increased drastically before the savings and loan crisis of the 1990s and the subprime mortgage crisis of 2008. When homeowners began defaulting, the crisis shifted to banks. Then credit froze as banks held worthless mortgage backed securities until the government stepped in. Government balance sheets assumed most of the banks’ debt and the Fed provided easy credit and ample liquidity through low interest rates and Quantitative Easing to spurn lending. Thus, the seeds were sewn for the excesses we see today in corporate and sovereign debt.

This article demonstrates how an economic slowdown will likely burst the corporate debt bubble. With limited room for increasing sovereign debt levels, the crisis may shift to currencies.

This bull market’s excess is undoubtedly in the corporate debt sector. Corporate debt has doubled since the 2008 crisis. Corporate debt to GDP is at its highest level in all of recorded history. Naturally, too much debt lowers your credit quality. This is evident by the fact that roughly 50% of the corporate debt market is BBB, or just one level above junk. The explosion of BBB debt can be seen in the second chart below. AT&T has amassed $191 billion of total debt. Ford has $157 billion of debt but a much less manageable 450% debt/equity ratio. General Electric and General Motors are two other companies with debt levels putting them at risk of downgrade. 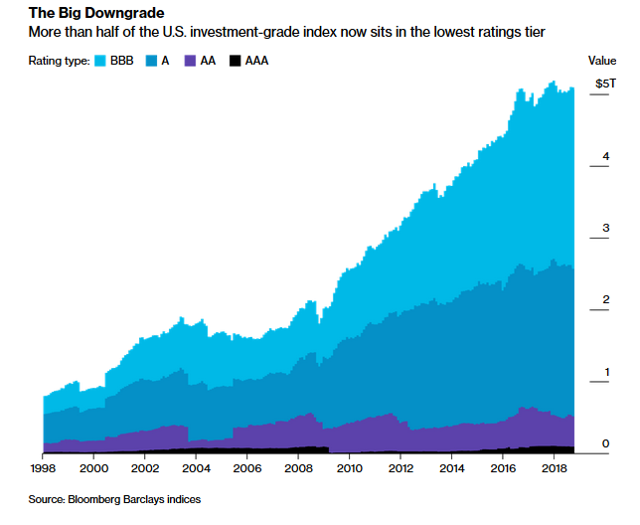 Corporate buybacks through issuing debt and cash flows is propping up equity markets. As the chart below shows, corporations have made up for the reduced demand from institutions (who are net sellers), households, and rest of world. If and when a recession occurs, expect a flight to safety from foreign buyers, pension systems, and financial institutions. This means less buyers of corporate debt and less buybacks. 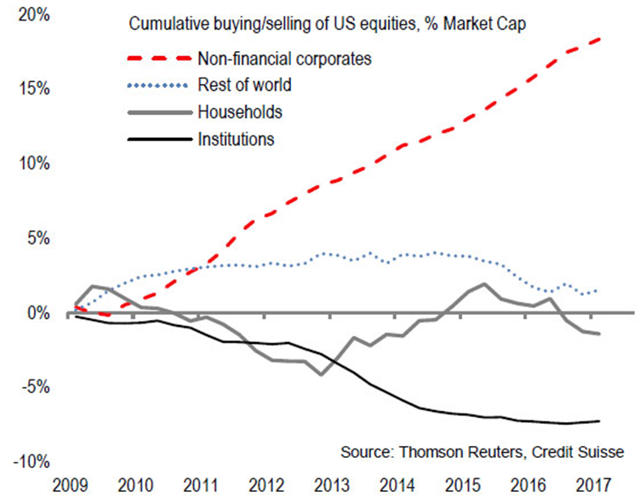 So when cash flows decrease in the next recession, less net buyers of BBB debt in a flight to safety, and many BBB corporations become downgraded to junk (the % depends on the severity of the recession), the share buybacks currently propping up the equity market will come to a screeching halt and nothing will be left to support current equity prices. Additionally, the junk bond market is less than half the size of the BBB market and typically faces a lack of liquidity at the first sign of recession. A nearly illiquid junk bond market cannot absorb a wave of BBB downgrades, especially from blue chip companies listed above. A major downgrade will make the junk bond market insolvent, high yield spreads will widen, and companies that rely on junk debt financing will be at risk of defaulting.

Likelihood of a Recession

With the transportation sector rolling over, reduced consumer spending, reduced semiconductor sales, global PMI at its lowest level in seven years, and the 2s-10s curve only 160 bps from inverting, we are certainly in the midst of a growth rate cycle slowdown. Despite this, the possibility of a recovery still exists with a dovish Fed cutting amidst these warning signs. I do not believe the Federal Reserve can kick this can down the road and prevent recession for another several years. The reason? They told us the probability is low. 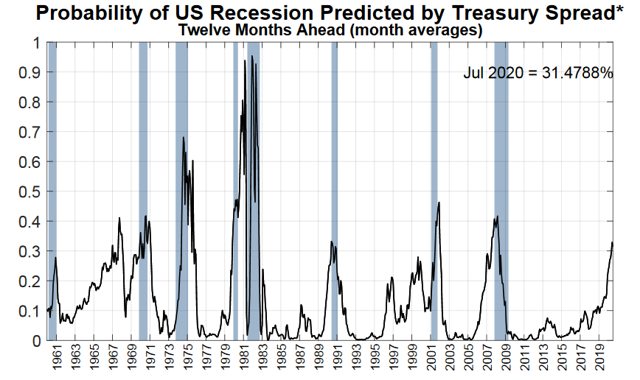 The U.S. will be forced to bail out overleveraged corporations. With Japan’s debt to GDP ratio at nearly 250% as a precedent, there is no doubt in my mind that the U.S. can take on more debt to prevent a collapse in the high yield corporate sector. However, two issues come to mind: 1) the political will to bail out large corporations. 2) the economic drag of high debt as interest payments consume a higher portion of federal expenditures. Not to mention the $122 trillion dollars of unfunded liabilities that the U.S. will have to finance with deficit spending.

The U.S. has several options. They can ride this monetary experiment ad infinitum and experience several years or decades of economic malaise like Europe or Japan. They can default on their debt. They can enact austerity to get the budget in order. They can grow out of the debt (decreasing debt as a percentage of growing GDP). Or they can inflate the debt away by monetizing it or devaluing the currency.

In a blog post here, I discuss Ray Dalio’s article on macroeconomic paradigm shifts. He believes in a combination of the above: “So there will have to be some combination of large deficits that are monetized, currency depreciations, and large tax increases.” With Modern Monetary Theory at the forefront of economic debates, this likelihood of this outcome has never seemed higher. I believe the second act of unconventional monetary policy will look something like what Dalio describes above.

Risk and Reward by Asset Class

This hopes to answer the so what. If the U.S. erases its sovereign debt through currency devaluation, the prices of gold and bitcoin will skyrocket. I also firmly believe that long term interest rates will reach zero, becoming a boon for bond prices. Disinflation is highly intact, which is why I’m currently neutral on commodities, yet recommend a portion of one’s portfolio in commodities for diversification. I also recommend long volatility positions as a hedge against sharp downturns.

The Fed’s recession index is too strong a sign to ignore. I recommend being underweight U.S. stocks and am neutral emerging market stocks though long-term bullish. This depends on price action of the U.S. dollar, which I cannot determine with certainty. This dynamic may take years to come to fruition, if at all. Yet the possibility makes gold and bitcoin attractive buys at the moment. With gold and bitcoin price action despite global disinflation, I believe investors are beginning to price in the possibility of currency devaluation.

The Federal Reserve Bank of New York added $63.5 billion to the financial system Monday, using the market for repurchase agreements, or repo, to relieve funding pressure in money markets.

Banks asked for $63.5 billion in overnight reserves, all of which the Fed accepted, offering collateral in the form of U.S. Treasury and mortgage securities.

In the repo market, borrowers seeking cash offer lenders collateral in the form of safe securities—frequently Treasury bonds—in exchange for a short-term loan. The term of these loans can be as short as overnight.

When the Fed adds money to the financial system through the repo market, it is acting as a lender. In typical repo market transactions, lenders can include money-market mutual funds, banks or hedge funds that are seeking to earn a slightly higher rate of interest than what is available from holding very short-term government securities. The borrowers are often banks, securities firms or hedge funds that use the cash to finance positions in the market.

Banks and hedge funds borrow or lend depending on their needs and investment goals.

The Fed began offering repo loans two weeks ago after a shortage of available cash in the financial system led repo rates to climb as financial companies scrambled for overnight funding. The actions marked the first time since the financial crisis that the Fed had taken such actions.

(Tempe, Arizona) — Economic activity in the manufacturing sector contracted in September, and the overall economy grew for the 125th consecutive month, say the nation’s supply executives in the latest Manufacturing ISM® Report On Business®.

“Comments from the panel reflect a continuing decrease in business confidence. September was the second consecutive month of PMI® contraction, at a faster rate compared to August. Demand contracted, with the New Orders Index contracting at August levels, the Customers’ Inventories Index moving toward ‘about right’ territory and the Backlog of Orders Index contracting for the fifth straight month (and at a faster rate). The New Export Orders Index continued to contract strongly, a negative impact on the New Orders Index. Consumption (measured by the Production and Employment indexes) contracted at faster rates, again primarily driven by a lack of demand, contributing negative numbers (a combined 3.3-percentage point decrease) to the PMI® calculation. Inputs — expressed as supplier deliveries, inventories and imports — were again lower in September, due to inventory tightening for the fourth straight month. This resulted in a combined 3.3-percentage point decline in the Supplier Deliveries and Inventories indexes. Imports contraction slowed. Overall, inputs indicate (1) supply chains are meeting demand and (2) companies are continuing to closely match inventories to new orders. Prices decreased for the fourth consecutive month, but at a slower rate.

“Global trade remains the most significant issue, as demonstrated by the contraction in new export orders that began in July 2019. Overall, sentiment this month remains cautious regarding near-term growth,” says Fiore.

WHAT RESPONDENTS ARE SAYING…

MANUFACTURING AT A GLANCE
SEPTEMBER 2019

ADDITIONAL INFORMATION IS AVAILABLE UPON REQUEST
Carl does not offer investment advice, but merely his own personal opinion. This report has been prepared from original sources and data we believe reliable but make no representations as to the accuracy or completeness. Carl, his affiliates and subsidiaries and/or their officers and employees may from time to time acquire, hold or sell a position in securities. Past performance is no guarantee of future success. Upon request, we will supply additional information. CarlBis@aol.com